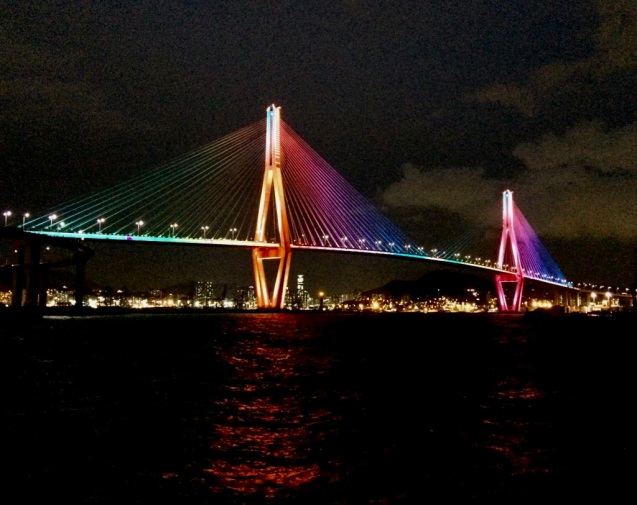 I thought I’d share my week’s activity in Busan, a place which, after initially overwhelming me, totally captivated and charmed me. I was lucky enough to stay in the Hyu Plus guesthouse, a 7th storey bijou establishment more like an apartment than a hostel, and it being low season and all, I oftentimes had the place to myself. I thought it was a great location next to Nampo Dong subway station. This city is the most generously served with public transport that I have seen yet. All the things I wanted to see were all within an hour or so. 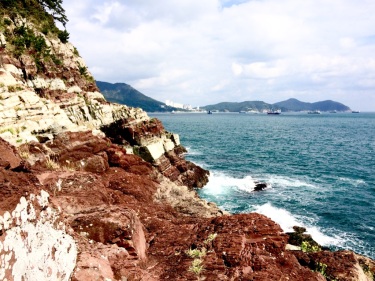 I got a weird vibe from this place when I arrived but I soon warmed to it. I have covered the Lotte Mall and Gamcheon in previous blogs. So here are some of my other experiences/impressions/adventures. A really good days hiking was to be had at Amnang Park to the South of Busan, past Songdo Beach. I couldn’t call it leisurely exactly because there is a lot of stair climbing and steep undulation as it follows the coastal headland round. Being stupidly self challenging, I thought the orange loop back went pretty close to the route out, so I decided to take the green route and ended up at the International Fisheries Administration, where I had to be given a lift back to the park from an official. (So grateful!) It was then possible to walk all the way to Songdo Beach via the 1km walkway which winds along the cliff (with another load of stairs). 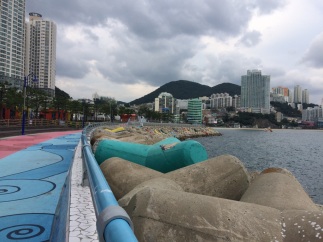 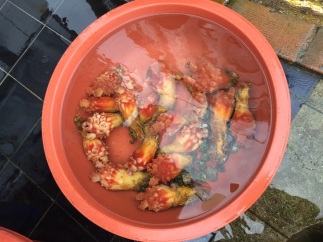 Or get the cable car – but I’m on a budget remember.  Songdo is obviously very busy in the summer and has a lot of strange, gaudy attractions including some bright coloured concrete, the ‘Cloud Walk’ and the most unusual sea food I have ever seen. Typically, I waited for the sunset to see Hangan Bridge lit up but it was a bit anticlimactic. Although going up in the lift to walk on top of it was pretty thrilling actually. 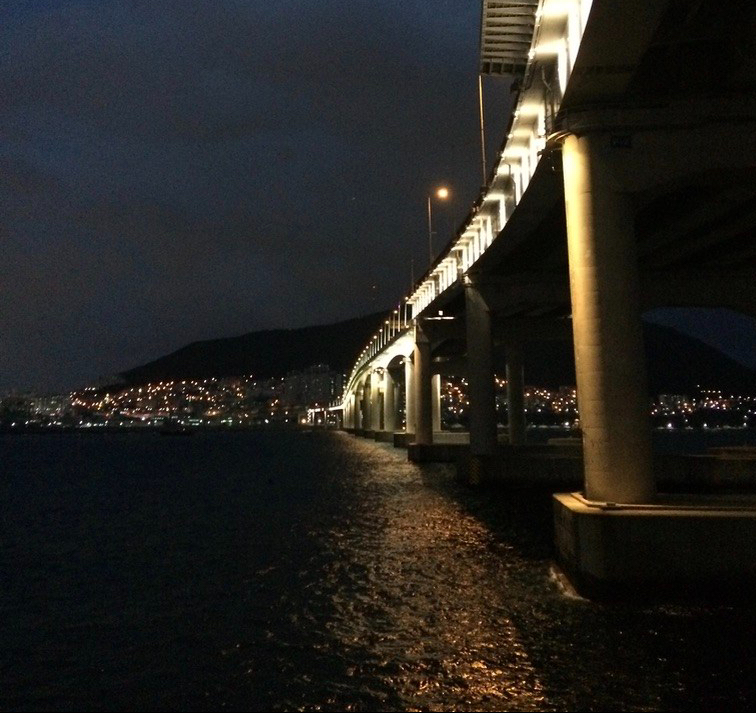 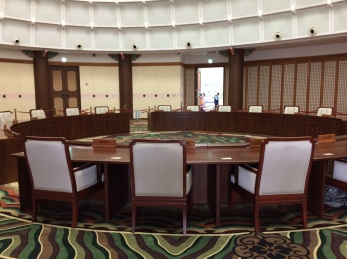 I caught the bus to Dongbaeksoem Park, one day and saw the APEC building where all the Asian dignitaries meet to discuss matters Asian. I walked all the way from there to Gwangali Beach, some 8 miles, and spend a few hours watching the sun change the character of  the the Gwangan Bridge, also named the Diamond Bridge.  Watching Gwangali come to life was a pleasant evening pastime and I got the subway back. 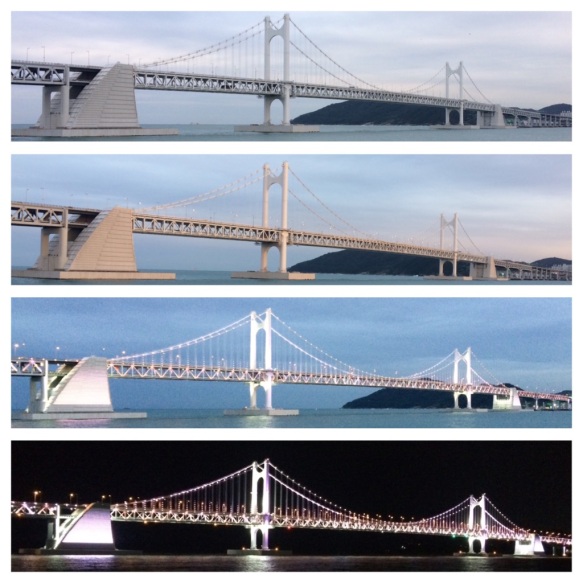 Shattered from walking my average 9 miles, I decided to visit Haedong Yonggungsa Temple instead of hiking into the wilderness for the one which no-one can find. It is pretty breathtaking perched on the coast if a little busy. There were some quieter areas walking northwards from the temple along the rocks and it was the perfect day for photos – maybe a little bit of a haze. 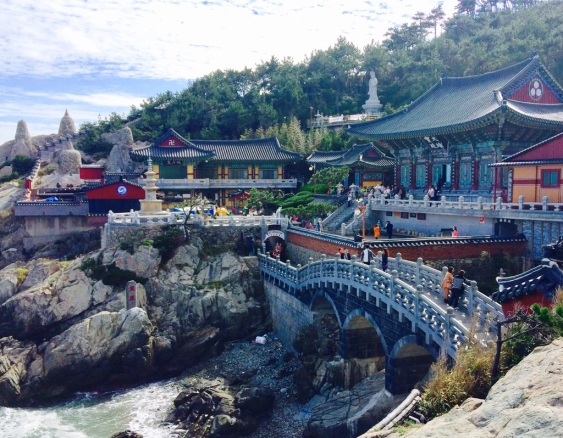 I visited a few markets either inadvertently or deliberately. The Jagalchi Fish Market is a spectacle – with many varieties of uncooked and cooked and dried delicacies – it’s a real working place not a tourist area – I mean, I suspect Busan is not a first stop for most traveling people. I went to the Busanjin Market, an indoor, multi-storey  melee near Beomil Station because my daughter wanted a Hangbok. I’m sure I was a little bit overcharged, but the experience wasn’t altogether unpleasant. Think Aladdin’s Cave. Something that is really quite remarkable is the extent of the underground market that links the Subway. It goes on forever with anything from antiques, iPhones, cosmetics and second hand clothes…anything you might think of. In addition there are very cheap restaurants where you can see that locals eat – I tried a hot stone bibimbap for 5500 – around £3.50. Nothing exciting but pretty good for gluten free me after a week of gimbap and weird rice crispy rolls. 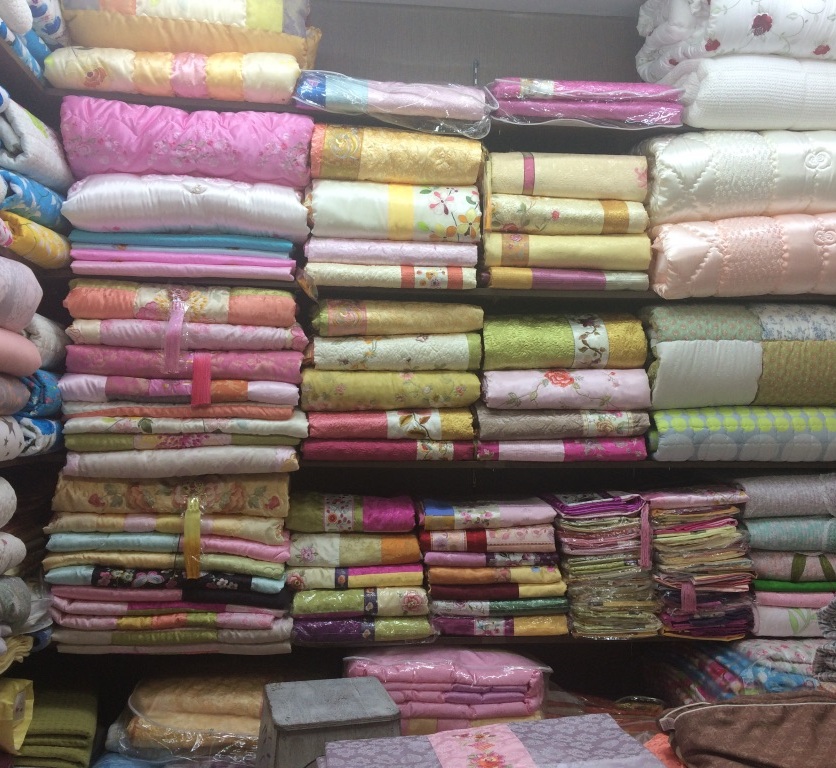 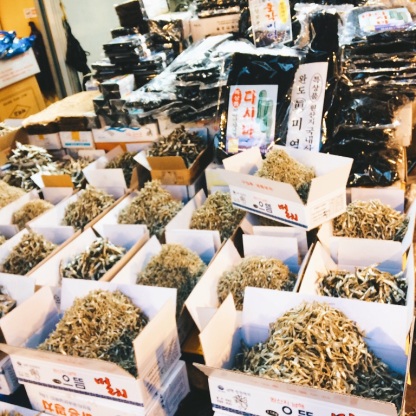 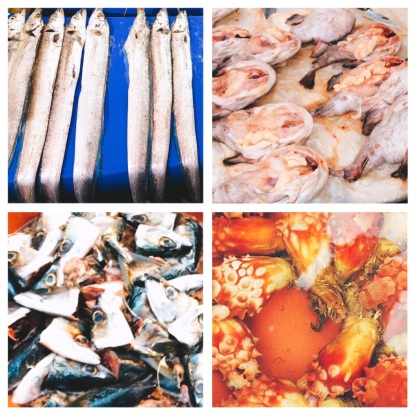 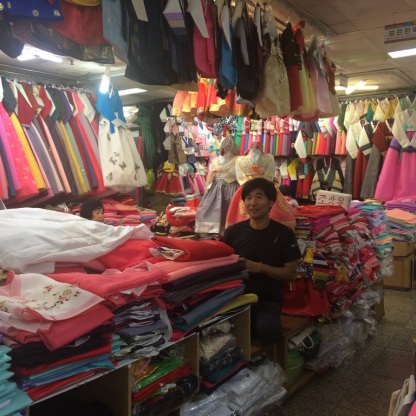 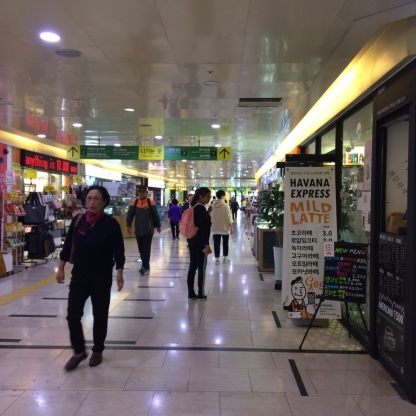 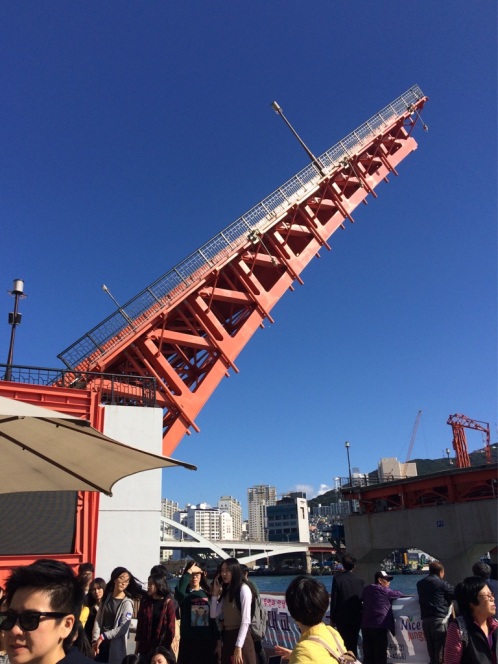 As a bridgephile, I can say that this country does its bridges proud and, like Japan, celebrates the aesthetic and architectural qualities of them. The Koreans particularly seem to like lighting them up – a veritable joy for me. But if you don’t fancy loitering under the archways after dark, you can go every day at 2pm to the Yeongdo Bascule and celebrate with everybody else, the lifting of the single leaf to let traffic through. And they do it in style. 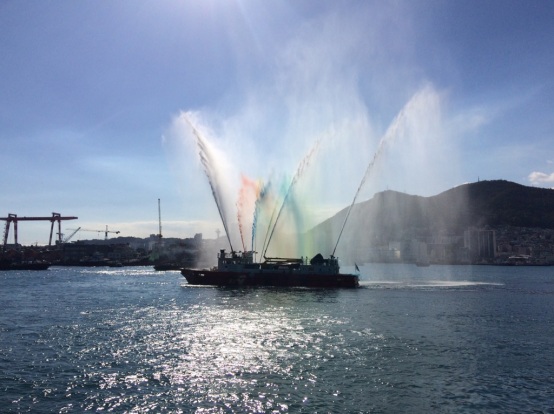 Like many places Busan surprised me and I would go back there  – I felt I hadn’t seen enough of the country. But I think Gamcheon Village sticks out for me as something I have not encountered and probably it might look like Cornwall or somewhere in the Mediterranean that I haven’t been. 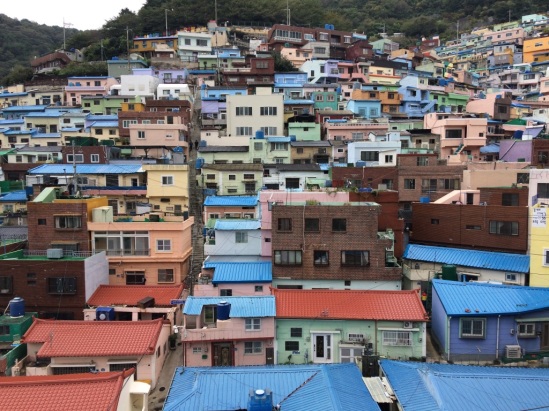 It wasn’t Japan. People are nowhere near as polite. The spit and smoke everywhere, are louder and there is not the order, or the air of a prosperous, gentile society. But the colourful charm of this city certainly captivated me. There are quite a few English speaking bars such as the Beached Bar at Gwangali and the Basement near Pusan University, as there is large community of ex-pat teachers here. The transport, as I said already,  is the best I have ever encountered in a city. You can get anywhere on the subway or  bus – but not after 11.30pm – then you have to get a taxi. If you haven’t enough cash to pay for the taxi you could try singing 80’s songs such as The Power of Love and Take My Breath Away to the driver  – this worked for me.