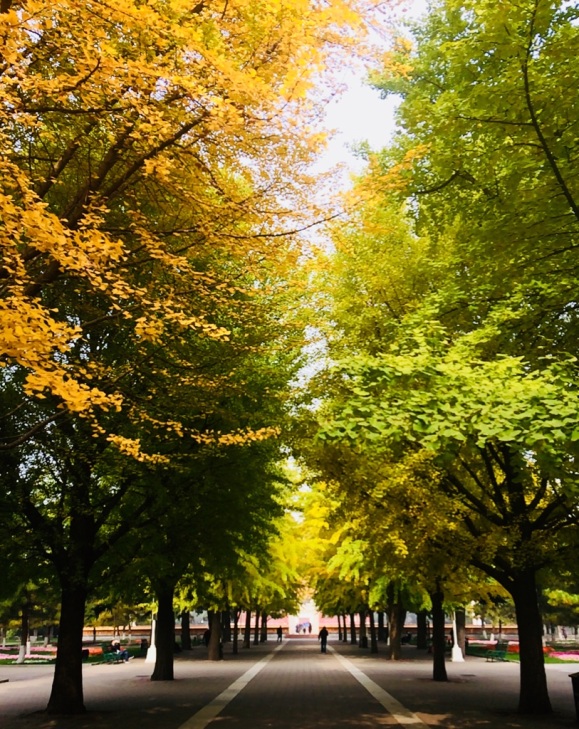 Beijing has by far the most comprehensive subway system on the planet. You just can’t go wrong on it. Every station has all the stops along that line displayed near the platform and on the train. All the station names and numbers are in English and they are announced in English on the trains. The complete map is posted everywhere. It is also huge! I think I read that this is the busiest subway system in the world. It must be, because sometimes one train is almost shunting the one in front out of the way. Somewhat annoying is the distance between some of the transfers – about a kilometre, so not so good if you are dragging you’re luggage.

But the upshot of this is that it is quite easy to find your way about if you stick to the subway, because Beijing is enormous, covers an extensive area and is a real higgledy piggledy mix of the old, the new and the dreadfully dull.   I was staying in a pleasant enough hostel in the Dongdan district. I only had a week, and if you’ve read any other posts on this blog, you’ll realise I don’t like crowds and clamour. So here is my week.

inside the temple of heaven

I visited Longtan Park which is not anything distinctive but a place where locals go to sing, dance and do exercise, and grandparents bring their grandchildren. But it was a good, non crowded place to start. And I found the local activities interesting. The impact over the week of Beijing’s traditional treasures was somewhat affected by the quality of the sky. But the Temple of Heaven was still exceptionally striking even on a hazy day. it was also not very busy as it lies in a very spacious, rather ordinary  park and is probably not so impressive as some other attractions.

I was so lucky the day I went to the Great Wall at Mutianyu – the perfect weather and conditions. It was an adventure – the subway to Dongzhimen, and then a 70 minute bus journey up the expressway on the 916. When I got off at Huairou, I was immediately swarmed upon by locals offering lifts to the Wall. I was adamant I was not getting one, but then  a woman offered me a ride in a minibus for 5Y. And I thought, hang on this is actually 50p. As there was a couple of other Europeans we decided to take a chance on safety in numbers. True to her word the woman dropped us right at the entrance to the visitor centre and showed us where to get the cable car ticket . I got the cable car up/toboggan down ticket doe 265Y . Worth every penny and much better value than Capilano suspension bridge which cost about the same. The scenery was breathtaking – but I was not prepared for the actual terrain of the wall. The gradient of the slopes and steps is incredible even on this well maintained section – and the stair risers are about 2 feet high in places. But this is one of this experiences that is truly once in a lifetime, and you can forgive the tacky tea/coffee/water stalls – they are quite tasteful hidden beyond the confines of the actual wall. The same woman gave me lift back to the 916 bus stop – but this time she wasn’t going lower than 10Y – maybe she got wise to my maths.

The Summer Palace is probably next on my list of unrepeatable experiences. Again the sky made a difference – there was a little haze, but it was a warm and sunny day with beautiful lake views, and although there were a lot of tourists, they tend to centre round the Hill of Longevity (which is quite a steep climb). The temple on this mount with its distinctive golden roof tiles reminded me of something from a picture of  Thailand or Malaysia ( since I haven’t been yet). Once I got to Suzhou St and around to the West Causeway there were far fewer people. And not surprising. It’s a big lake and takes about 2 hours to walk round at my pace. But it is very pleasant indeed with all the little bridges and walkways, including the Jade Belt bridge and the Seventeen Arch.

The 798 Artzone, although famed,  was just too big and bewildering for me, I think it was an ‘off’ day. And what do you do in these places if you can’t eat the food and you have no money to spend on art. However, I inadvertently wandered into 751, some kind of disused foundry which you can climb up and explore. This provided the best fun of the day. Reminded me of my childhood days when I used to play on abandoned quarry machinery – not something I would advocate obviously, but in the 60’s and 70’s, I don’t think Health and Safety were high on anyone’s agenda! On the way back from that rusty playground I decided to try and find a second imaginary gluten free cafe. It became a farce, of course, as on the first day when I went looking for the imaginary Marks and Spencer’s that purportedly sold GF  bread (and walked 9 miles).

However, I did discover a very spectacular, shopping centre called Parkview – which at first I thought was a modern art museum. The pictures above should explain why. I didn’t get the artwork but that’s not unusual for left-brained me. But it was worth a quick gander. I mean, coming from the North of England, we have Meadowhall and this is the largest shopping centre in the area. (There is no modern art there, but there are certainly some travesties to observe.) 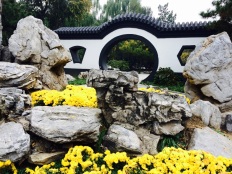 I had one weird day visiting the Temple of the Sun Park. Actually there isn’t really a temple as such, but it was a very nice park. Again, one where locals go to have lunch and practise Tai Chi. I spent an hour or two snaking round its beautiful crafted stone and water gardens, and found a couple of nooks where I could practise my Sil Lim Tao.

I had quite an enjoyable day wandering round Shichahai, an area reputed for its ”hutongs’, quaint back streets and touristy tack. You know me – I don’t like spending unless its some kind of experience you just could not get anywhere else. Getting there cost me 2Y on the public bus, about 20p. I got off somewhere north of the lake and walked down. The area near the footbridge is the most popular, but once you stray away from there, it’s just like rambling round people’s lives really.

Beijing is really big. I probably didn’t see much of it . I do a lot of wandering, and then when I get back to the hostel, I know I have really experienced something – but it’s not always easy to say what.  It seemed to me a strange mixture of super-modern shopping developments, very moving and obvious poverty, lavish cultural  heritage, political pomp and a kind of desperation to be acceptable to tourists. I found it heavily polluted and dense, but not like the South. That’s my two penn’orth for what it’s worth. 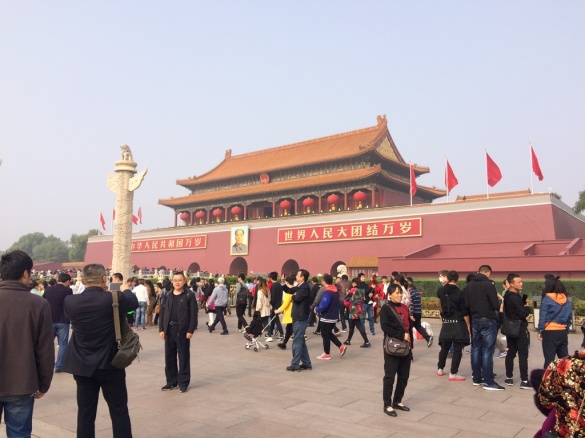